With a poor weather forecast and footy on the TV it was always going to be a quiet weekend! Was a bit of excitement on Friday as came downstairs just before going to work  a Sparrowhawk was sitting on the lawn having taken a Sparrow!! Panicked rush around to get the camera set up but managed a couple of shots through the window before it exited left with prey!! We had multiple visits from several different Sprawks over the winter but haven't seen one for a while, it is no surprise really the garden is full of young Sparrows and Starlings visiting the feeders, easy pickings for an experienced Sprawk! The bird visited again Friday night but was unsuccessful as was my attempt to get a picture.To be fair to the Sparrows they are fast learners,no more lounging about on the feeders,it's a quick dart in and straight back to the safety of the Hawthorn!! 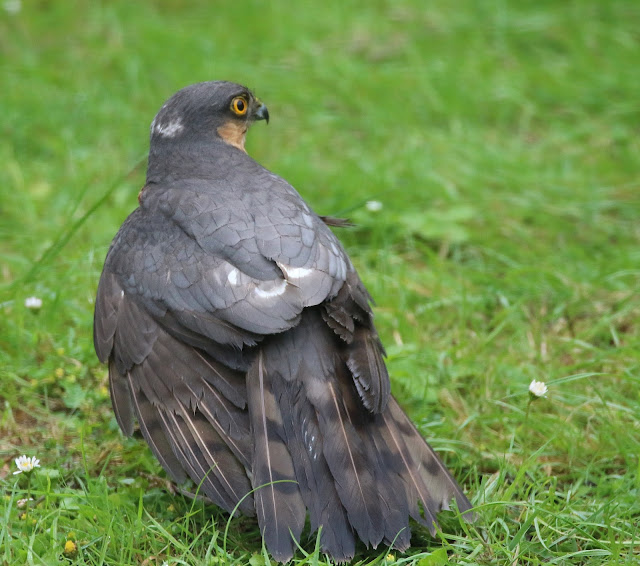 Waking up to a cold wet morning,I abandoned any thought of going birding and made some Flapjack instead, always a favourite!! Having measured out all the ingredients and having started melting the Butter and Sugar  I discovered I only had half the required Oats disaster!!! 😱😱 Luckily some quick thinking and  the Muesli box was raided which was quite  a good result as it turns out Brazil Nuts taste extremely nice in Flapjack disaster averted!!

So then the footy!! I've really enjoyed the Euros so far with some cracking matches, as an England fan I'm obviously living on my nerves but after a great performance against the Germans, I was fairly confident of a good result against the Ukraine, highly enjoyable game and our best performance so far!! Only slightly marred by me picking up an injury to my knee leaping from the sofa in celebration of the first goal!!!😏😲⚽!! I should be fit for the Semi!!!
Since the start I have felt with our array of attacking talent we have a good chance, I have, it has to be said been slightly bemused by some of Gareth Southgate's decisions both in Squad selection and matchday team selections, I am a fan of the two holding midfielders, being a Leeds fan I'm pleased to see Kalvin Phillips doing so well, he was magnificent for us all last season and has been equally good in his partnership with Declan Rice, but playing people out of position when you have world class players in that position on the bench is weird but we seem to have gotten away with it, we have also seemed timid in the early matches relying on tight defence but creating few chance ourselves.
We seem to be building nicely into the tournament, to beat an admittedly poor German side, with all the history and baggage that goes with it,sometimes playing a flat back seven was a triumph it seems to have flooded us with confidence and the performance against Ukraine demonstrated that with a much more attacking attitude! Ukraine to be honest were poor,they looked tired and seemed to give up when the second goal went in! However it laid down a marker and will certainly influence how Denmark come out against us, They are a pretty neat and tidy team with a decent striker and will be a threat on the break, they also have the "Erikson" factor,but I think if we play to the level we have done so far we should have too much for them. Southgate seems to have the knack of focusing the team on their individual performances, will be interesting to see the team he puts out, I imagine it will be the same 11 that started the Ukraine game. Although wouldn't be surprised if Foden came in for Sancho.
I have never been convinced by Kane and Sterling, Kane for me is good against poor defences but against better defences he is pretty static and ends up coming deep for the ball which means he is not in the area when needed, to be fair he needs service and our negative,timid, early performances were woefully lacking in them!!  He scored good goals against Ukraine, when Southgate seems to have finally taken off the brakes, although the first one hit the keeper, but went the right side of the post and the second went through his legs but you need a bit of luck and it was his most energised performance of the tournament, in which I think he generally looked tired and out of sorts. Southgate has stuck by him and hopefully he will continue to get the goals!! Sterling for me in the past always seems to be a mixed bag, capable of great things but too often,running down blind alleys,giving the ball away or trying to shoot through a wall of defenders when better options are available. In this tournament he seems to have cut down the mistakes and bad decisions, although that pass to Muller could have been lethal!! To be fair, in the early games he was the one player that seemed to want to take on the opposition driving at them and opening up the game for others, and his pass to Kane for the first goal in the Ukraine match was sublime as was the back heel to put Shaw through to set up his second which was pure quality! Southgate has stuck by them,making it clear they were his main men and that seems to have paid off, hopefully that will continue. Presuming we beat Denmark,fingers crossed, Italy or Spain await, Italy have looked pure quality from the start, they have warriors at the back and have looked quick and sharp throughout, Spain have been slow to start and are in no way as good as a few years ago when Xavi and Iniesta ruled the roost,but once you loose the ball to em it's a bugger to get back and they have created loads of chances in the games I've seen,Indeed if Morata had his shooting boots on he could be in double figures by now!!, Neither will be easy although I think they will have a lot of respect for us as well and we shouldn't fear  either team!!
Predictions
I think we will beat Denmark 3-nil
I think we will beat Italy 3-2 in a thrilling final or lose 2-0 to Spain in a frustrating final where we can't get the ball and Rice gets sent off in frustration!!
But I'm just a middle-aged birder who hasn't kicked a ball in anger since 1980 so I should ignore all the above!!😂😂😂😂
So today, after a lay in, due to recovery from all last nights excitement,the weather again looked pants so abandoned any thought of going out. Instead decided to celebrate Independence Day when Will Smith bravely saved us from alien invasion😀😀 by making American Style Pancakes for Breakfast!!


After a quick trip to the Garden Center where 2 plants were purchased,I decided to stakeout the Garden in the hope the Sprawk returned, it didn't😢 However some really good news was a family of Blue Tits visited the feeders, we have had a regular pair of Blue Tits visiting for years,may not be the same pair obviously,but we have never had adults feeding young before!! apart from that we had the usually Sparrows with one show a bit of Leucism, trying to  get a pic of a specific Sparrow in a certain position is quite tricky!! We have our pair of Feral Pigeons including a striking white bird, they never seem to be more than a couple of feet apart. Likewise the pair of Collared Doves who are also never far apart. The peace was shattered by the arrival of the Starlings, who seem to arrive on mass for no particular reason and leave a few minutes later in the same way! 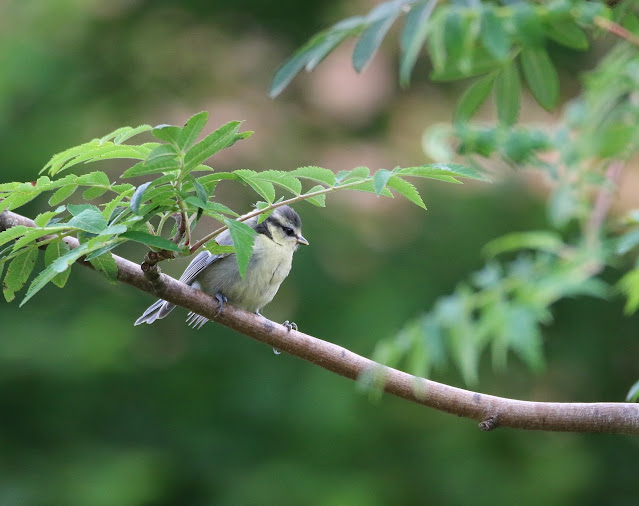 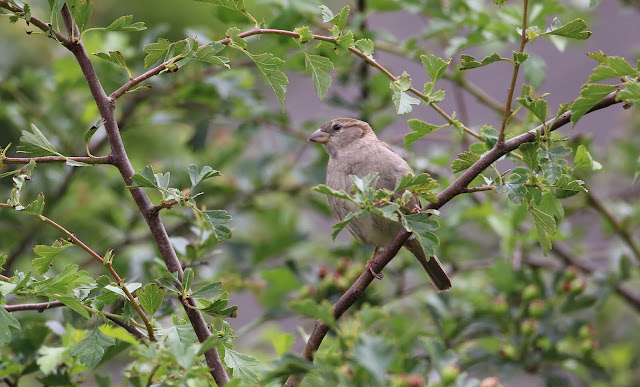 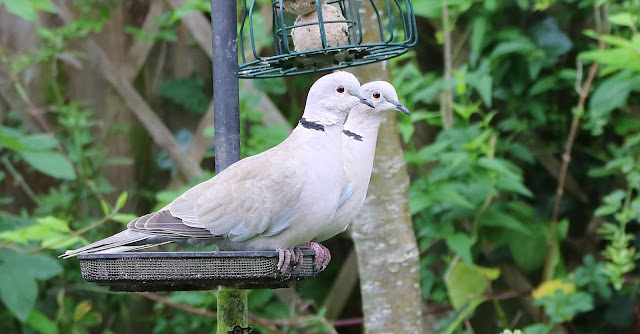 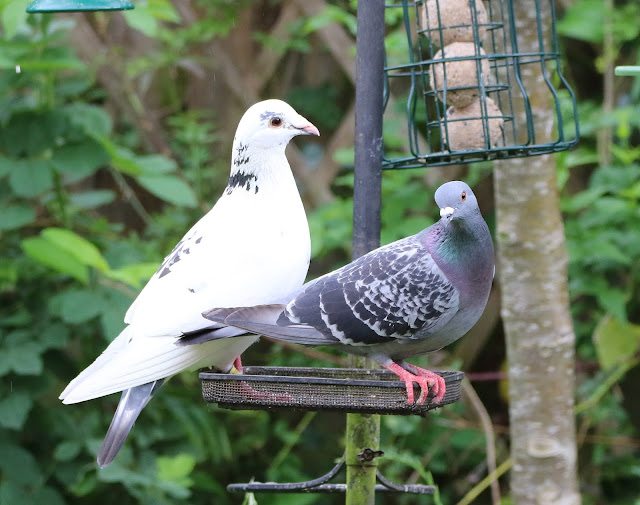 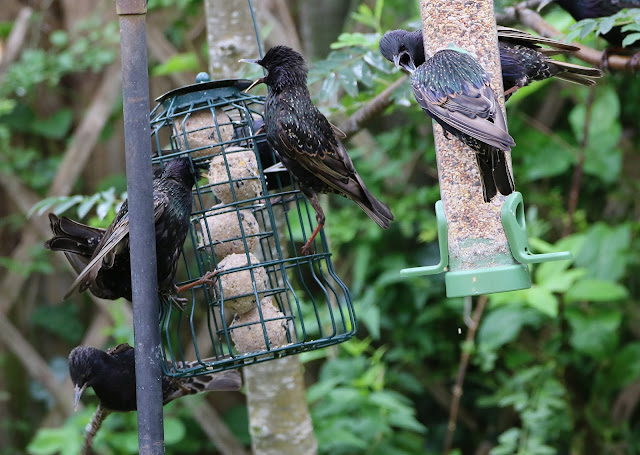 So a quiet weekend,hopefully the weather will improve and I can get out birding soon, my waistline hopes so to!!!😀😀😀😀😀
Cmon England!!!!⚽