Spring in the air??

Well some signs of spring in the air for our exercise walk today, not many mind but some, the first was a couple of Snow Drops in our garden which was good but looks like the Crocus in the front lawn have finally given up the ghost

We went through to Kemps and out into the fields beyond, the footpaths are basically mudways, not pleasant and not really conducive to looking for birds what with trying not to fall arse over tit!! Couple of Herring Gulls gave a low flyover, wouldn't normally mention it but with the coast out of bounds probably the closest I'm going to get to a Seawatch  for the foreseeable!! The highlight around the hedges here were a couple of Blue Tit and a Goldcrest!

So it was up to the Dungheap to save us 💩 Once again it produced, with two Pied Wagtails, several Meadow Pipits and a good candidate for bird of the day a cracking Grey Wagtail, which Margie spotted flying over the heap and gave me the heads-up!! Was sure I'd heard a Grey Wag here before  and had a couple of Flyovers previously but this was the best sighting by far!! There was also a Song Thrush lurking in the grass in the field next to the heap! All hail the heap💩😅!!!


Margie dragged me away and we headed down the lane, plenty of Pigeons in the trees, another Song Thrush in the hedge and a Kestrel briefly on a post the bright spots on this part of the walk!


As we past the Turkey farm I noticed a large amount of Thrushes running around on the deck, we changed our route and followed the path through the farm, at this point another another Grey Wagtail flew over calling but landed to far away for pics, concentrating on the Thrushes turned out to be pretty frustrating the light was awful and they were pretty flighty, mostly Fieldfares and a few Redwings we were surrounded by them as we walked through the farm to the Herring Stream and followed it back to the lane but pics were at a premium. The flock of the Thrushes and Starlings in this area must be a couple of hundred birds, but difficult to capture it with the camera😢

So back on the lane we head back towards Hurst the Kestrel puts in another  appearance, we soon become aware she's not alone, a bit of interaction with a Male ,not sure if it's flirting or war to be honest but they have a bit of a tussle, before the Male gives us a nice close flyby and even does a bit of a hover but in exactly the wrong place for the light, pretty much a silhouette but I've lightened the pics to see some detail!

The Kestrel disappeared and we continued down the lane, Margie took a pic of a Robin, far fewer Robins, Blackbirds, Dunnocks etc in the hedgerows this week not sure why!
At this point we had reached the Heap💩 again when the Kestrels re-appeared with the male throwing some good moves before settling on the wire!! I went full Ninja blending into the hedge in an effort to get close, might have worked too if hadn't been for those pesky Fieldfares!😲 Approximately 50 that I hadn't noticed (so focused on the Kestrel obvs😏) erupted out of the hedge all around my head!!! Not sure who was more surprised me or the Kestrel but that put pay to that!!I didn't even manage apic of the Fieldfares!!
A few pics of the boy throwing some shapes below and the one pic I did get of him on the wire! 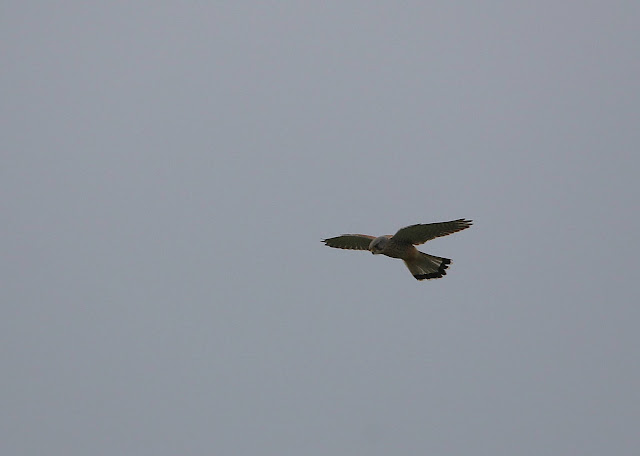 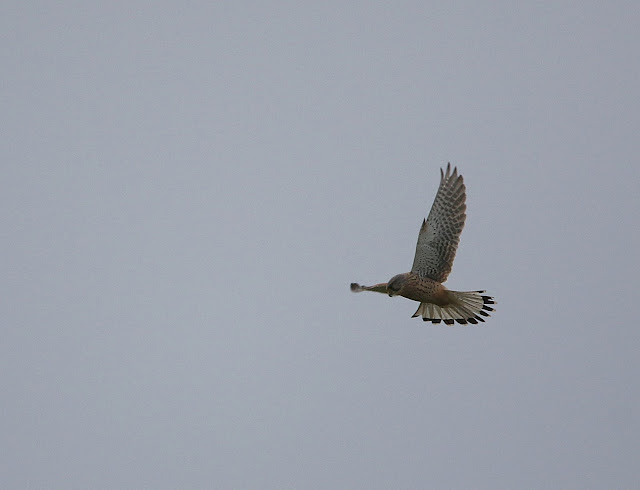 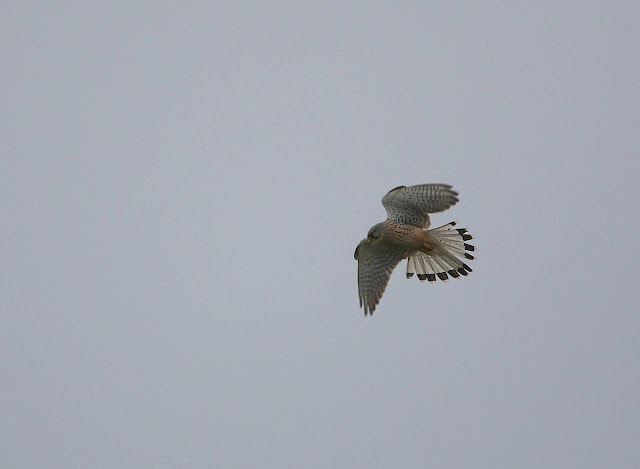 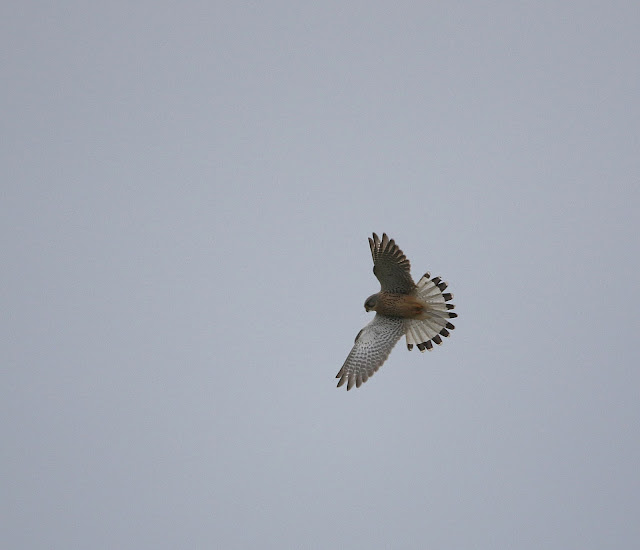 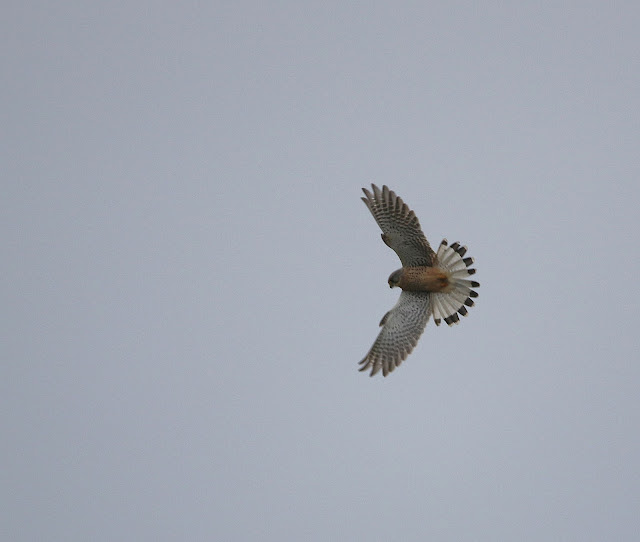 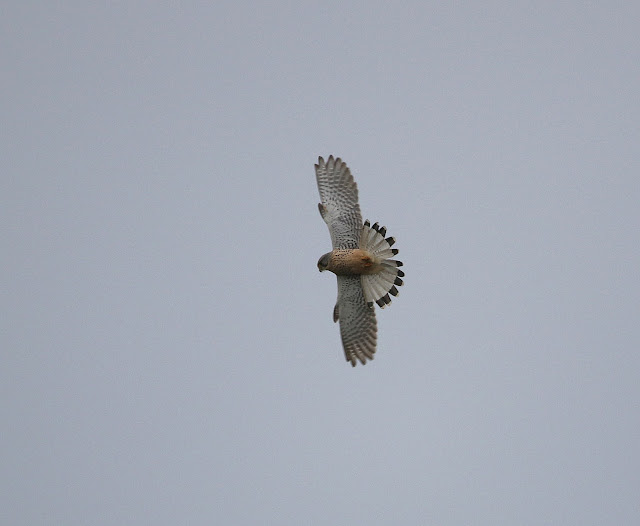 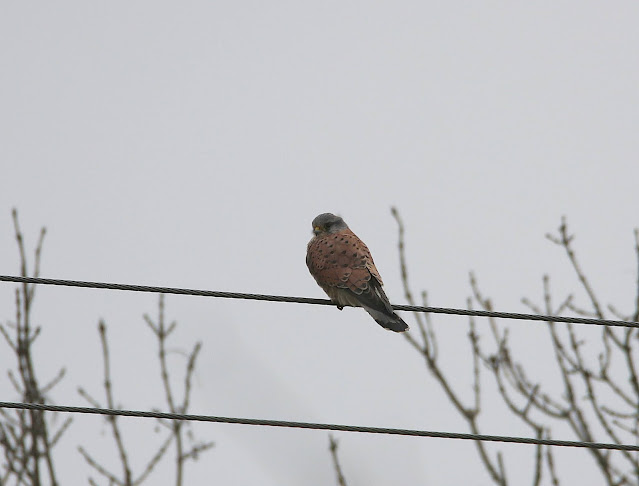 And that was about that we tracked back down the lane with no more significant sightings except a frisky horse and a fly-tipped fridge freezer and made it home for Marmalade on Toast, Chocolate Cake and Coffee nice morning walk all round!!

Terrible weather and forecast today so headed to the kitchen. Memories of Saucepan cake from my youth inspired me, So went down the hardcore Chocolate route. Although this is called a fridge cake it's pretty much melt chocolate and butter and pour it over broken biscuits!!

So basically break up the biscuits, chop up the hazelnuts and the glace cherries (allow an extra 6 cherries for compulsive eating during this phase of the operation!😃) and bung them in a bowl with the sultanas

Hardest part of this recipe is lining the tin with clingfilm, bloody stuff has a mind of it's own but I wrestled it in eventually😀😖

In a bowl over water melt the Chocolate and Butter ,I used two bars of Green & Blacks cooking chocolate, one plain and one milk and then a small bar of their normal Dark Chocolate.
Cue gratuitous pics of melting chocolate 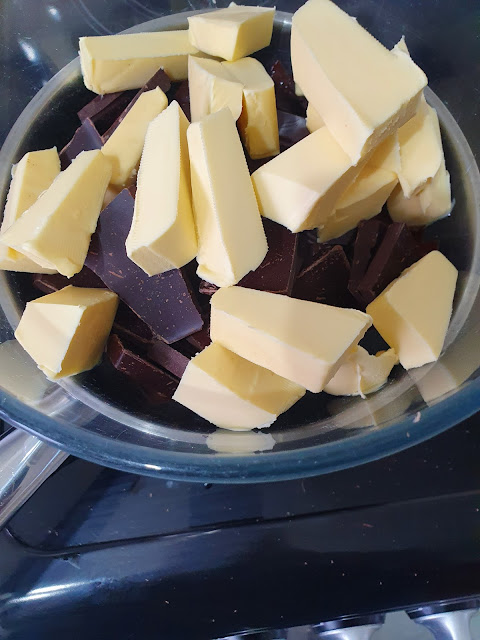 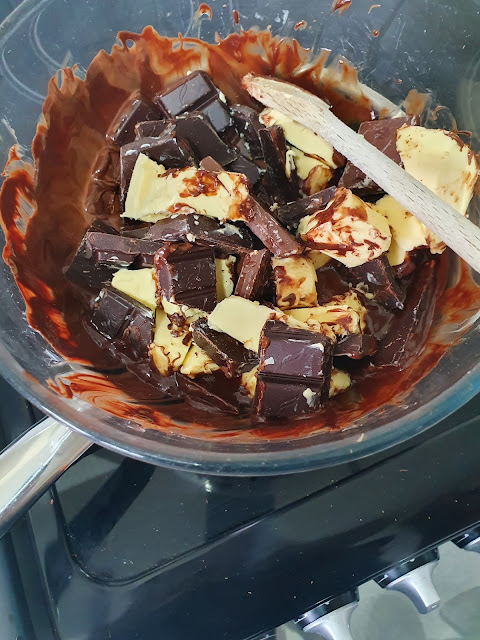 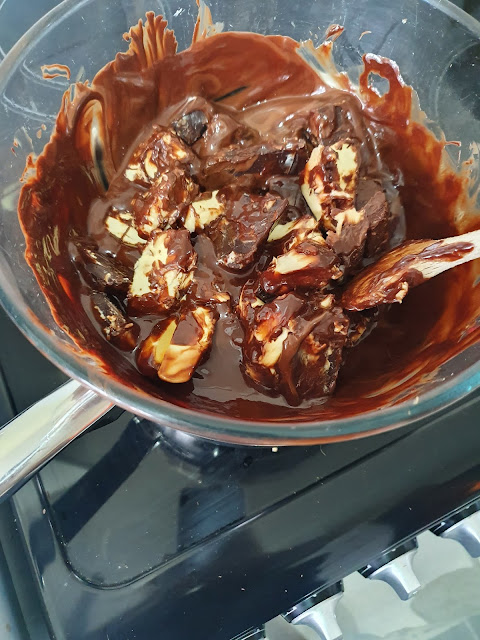 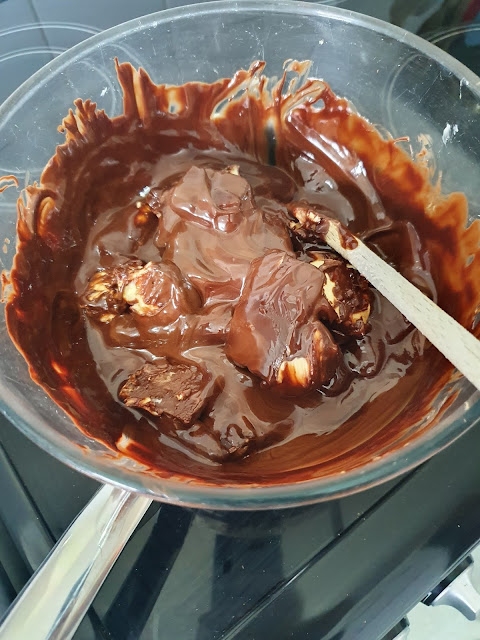 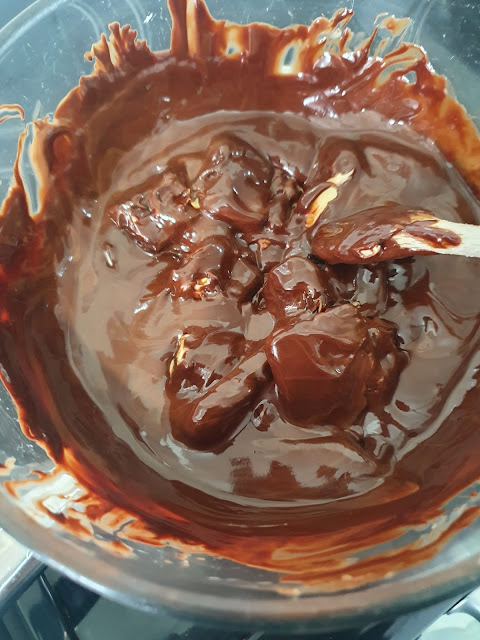 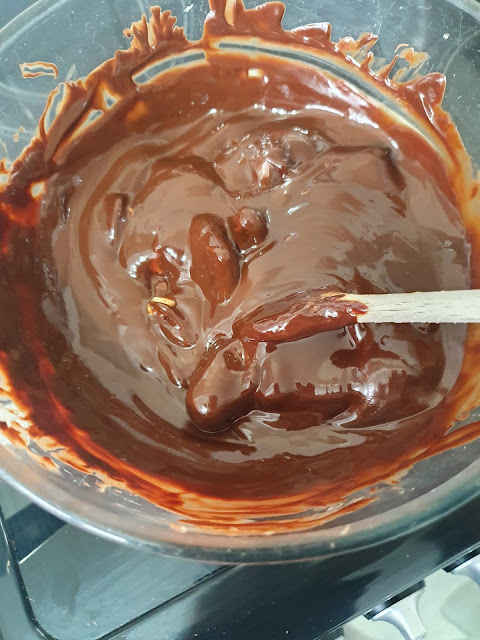 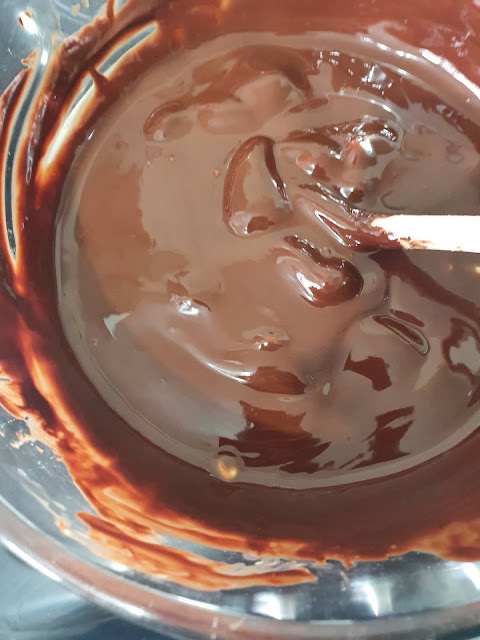 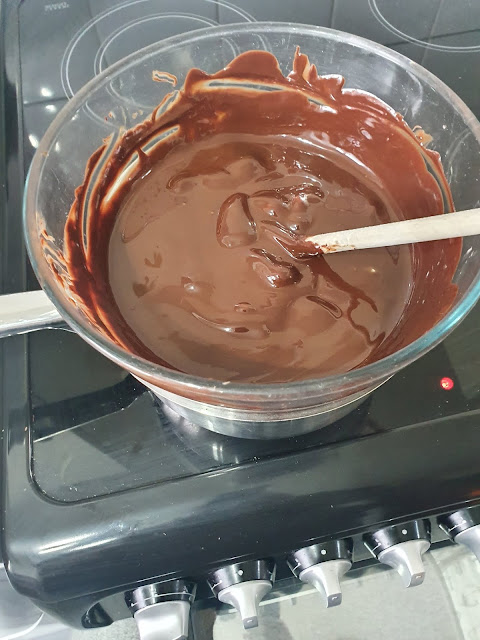 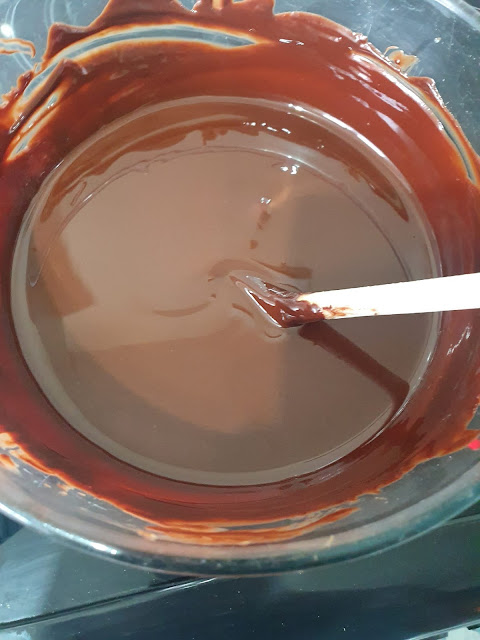 Take off the heat and whisk in the Golden Syrup and Cream. I enlisted Margie to do the whisking part while I drizzled in the liquids!

Now put into the fridge for a minimum 4 hours!! 4 fricking hours!  nooooooooo!!!!!!!!
So whilst I'm waiting I decided to make a Quiche for tea, first to make the pastry, cheese shortcrust pastry!! I find a decent recipe on tinternet and I get to use my plastic blade on my new food processor whoop whoop!! However it turns out the processor isn't as big as I thought and I failed to read the small print of the recipe which suggested this was a batch recipe ,I thought a whole pack of butter was excessive for a Quiche!!

So rolled it out, I'm not that great at pastry to be honest and after the Lemon Tart incident, I'm even more nervous but it goes into the tin ok and a bit of patching sees it sorted.
So the main problem I have is not enough baking beads which I forgot to rectify after the "incident" so had to improvise, but it came out alright in the end.
For the filling, going Green Pepper and Mushroom due to the fact that's what I have in the fridge!!! Cheese of course a mixture of Cheddar and Parmesan!


Of course in the heat of getting it in the oven without spilling any I forgot to take a pic of the completed dish!! 😂Bit of Black Pepper and a sprinkling of Cayenne and it's cooking away %100 Organic apparently you can't put hob-Nobs in a savoury Quiche!! In some people's opinion😁!
So how did it taste pretty good!! Although it was just on the brink of cooked!! Though the knife came out clean probably needed an extra 5 minutes, still tasted cheesy and the mushrooms were tasty!!
So Pudding time after a lot more than 4 hours, such self-control!!!💥

Definitely one for the chocoholics!!! Think if I do it again will up the biscuit to chocolate ratio, but as I'm a confirmed Chocoholic I will probably manage to eat it over the next few days/weeks!!