Today was a bit "after the Lord Mayors Show" following yesterday's successes (see yesterday's post for details) We got up quite late and the weather was grey and windy, we looped north of the village up Langton Lane Via the Dung heap across the Turkey/Pheasant Farm ,back across the fields to Cuckfield Road and saw very little, highlights were the Wagtails with 2 Grey and a Pied on the Dung Heap and several Pied on the Turkey Farm, the other major occurrence was the sighting of our first Swallow of the year, Unfortunately I was mid-way over a stile at the time so only managed 4 pics all of which are atrocious but I included them below anyway, on the plus side in the excitement I didn't face-plant over the stile!!!😂

To cheer us up I made an Organic Coffee and Walnut cake which Margie gave 10 out of 10 (was tasty to be fair) pics of that below as well!!

Some of Mine and Margie's pics below with notes ! 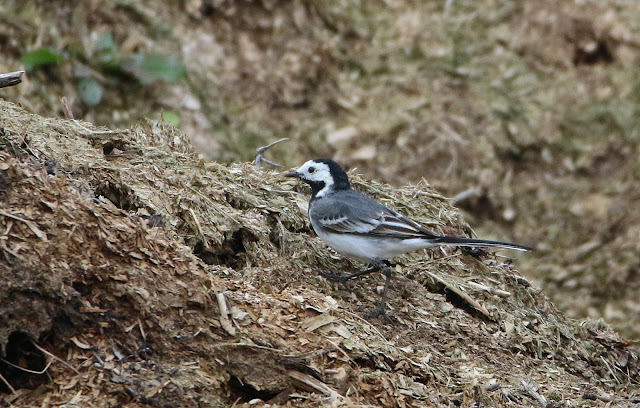 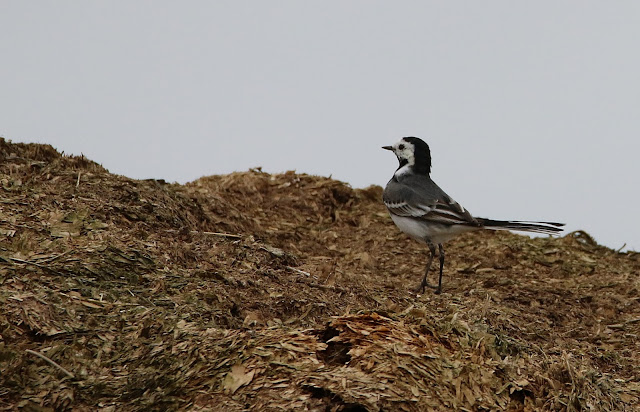 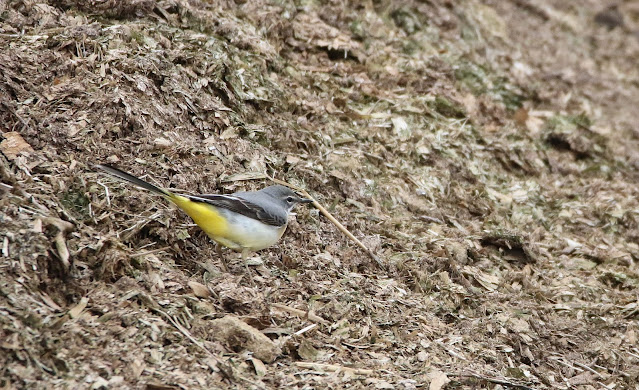 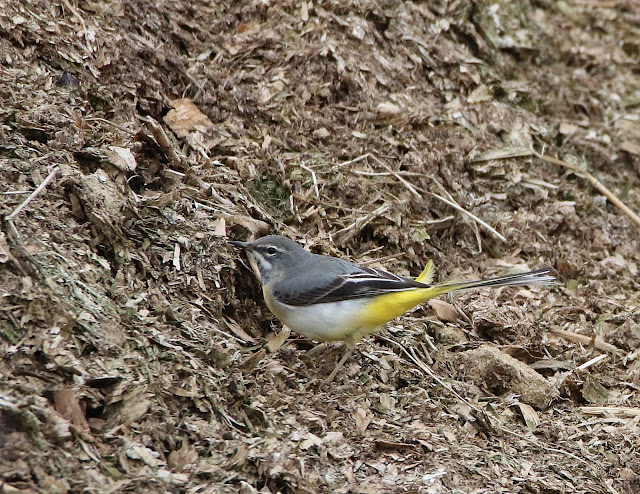 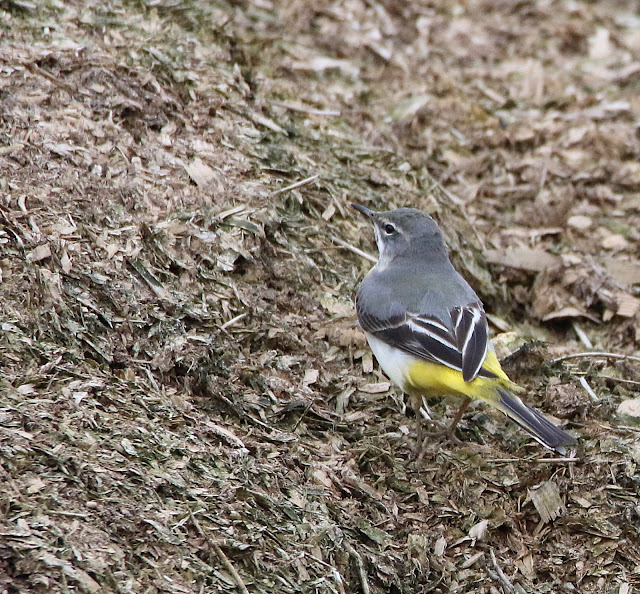 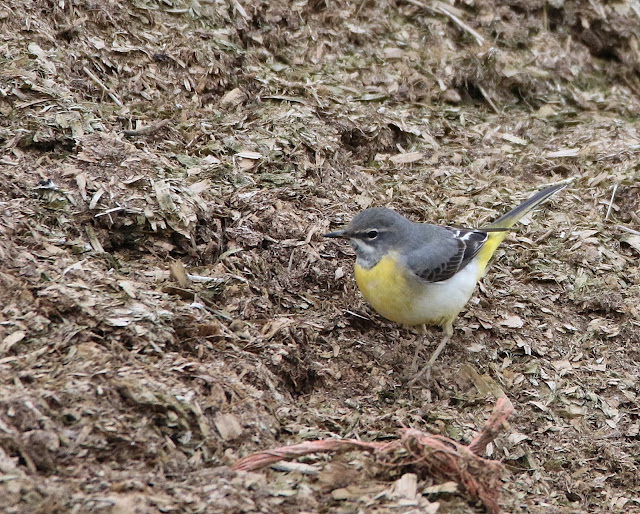 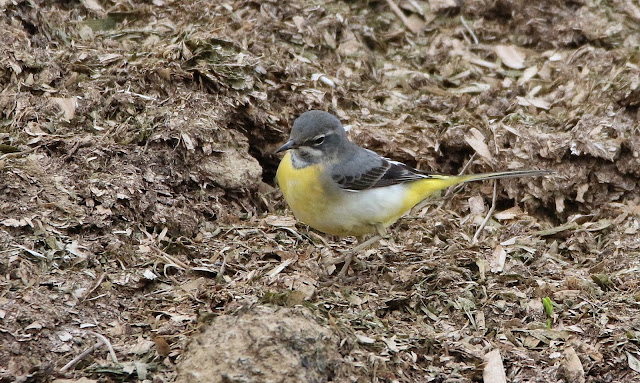 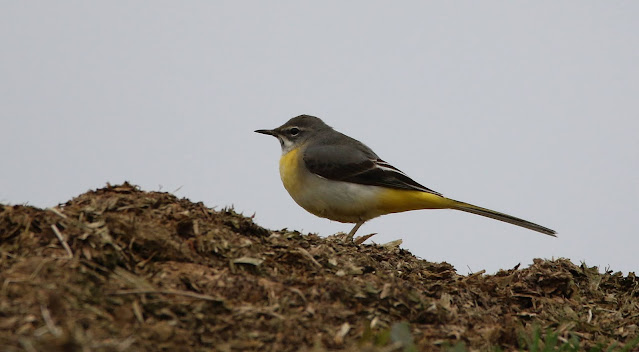 There now follows gratuitous pics of an Organic Coffee and Walnut cake look away now if dieting, not saying it's strong but I had one slice with a cup of Coffee may not sleep for a couple of days!!

With multiple reports of Wheatears on the coast, 4 singing Chiffchaffs at work and a fairly good weather forecast, felt there was a good chance of finding some evidence of migration, dreams of a Stone Curlew, Dotterel or even a Hoopoe were of course completely unrealistic but surely there was a chance of Wheatear or a Sand Martin??!! I have seen Wheatear before in Hurst so felt the fields at the end of Bullfinch Lane were the best bet!!

I have struggled to get going since the jab having suffered some weird dizzy spells especially first thing in the morning so impressed myself being up and out of the house by 6.15!! Margie's muffled words from beneath the duvet lead me to believe she was staying put, so on me own again!!😲 There wasn't a cloud in the sky so hit the road feeling confident!! Our road had the usual Sparrows and Starlings and some Jackdaws were eyeing up the local chimneys, I crossed the fields to Langton lane nice calling female Bullfinch that I some how failed to get any kind of shot of 😏 and some Rabbits the highlight but  a pretty quiet start! Was it going to be one of those days again!!

Up Langton Lane, bravely resisting the call of the dung heap, and down onto Bullfinch Lane all pretty quiet with just the usual Blackbirds, Robins, Dunnocks and Wrens in profusion. At the farm some House Sparrows, a couple of Pheasants and then a little further on, I bumped into an old friend !!Yep twas Paul the folically challenged Song Thrush (who I've mentioned in my previous Blogs) Hurrah😃!! Most Song Thrushes seem to have stopped singing now, busy off building nests and stuff, Paul being bald and therefore several times more virile than other Song Thrushes probably already has a couple of nests under his belt and his getting ready for the next one😍😎😃😃😃

Leaving Paul to the ladies I travelled further down the lane ,where I had an interesting encounter with a pair of  Treecreeper one presumably the male (I know I'm assuming gender roles here, sue me!!) caught a fly then flew done and fed it to the female, I of course missed this shot(In my defence I nearly dislocated my back tracking the buggers!!)


The fields opened up and I began searching for Wheatear in earnest, scanning the fields relentlessly , immediately came upon a pair of Yellowhammers and a couple of Skylarks but no sign of the target or any other of the hoped for species😢  I tracked up to Yellowhammer alley, plenty about today ,had at least 9 males though strangely no singing?! The first was high in a tree catching some rays, plenty of Skylarks about as well. There now follows and inordinately large amount of Yellowhammer and Skylark Pics sorry!!


Ok only 16 pics not to bad ,trust me could have been a lot worse!! I spent a good 3/4 of an hour here, but no evidence of any Vis-Mig whatsoever although a single very vocal Fieldfare did fly into a tree, not really the migrant I was hoping for!!! I headed back down towards the lane more Yellowhammers on the hedges, the hedges here although low are quite thick and the little buggers tend to sit on the side furthest away making focus difficult, however they hadn't reckoned on my ingenuity and sneaky use of the 90 degree bend in the hedge haha!!


I turned the corner past the small Industrial Units, two Goldfinches landed briefly atop some Conifers whilst photographing these I noticed some small birds flitting about underneath Goldcrests!!! I then spent a happy, though mostly frustrating 20 minutes trying to get pics of them, they seemed oblivious to me as they chased each other through the thick under growth and searched for food, I took several hundred pics most of which show blurred Goldcrests or parts thereof ,but then for a few seconds a moment of perfect calm as one of them popped out for a few whole seconds, Hurrah, the result my best ever Goldcrest pics (to be fair they didn't have much to beat ,these little blighters are a nightmare to get clean shots of!!) 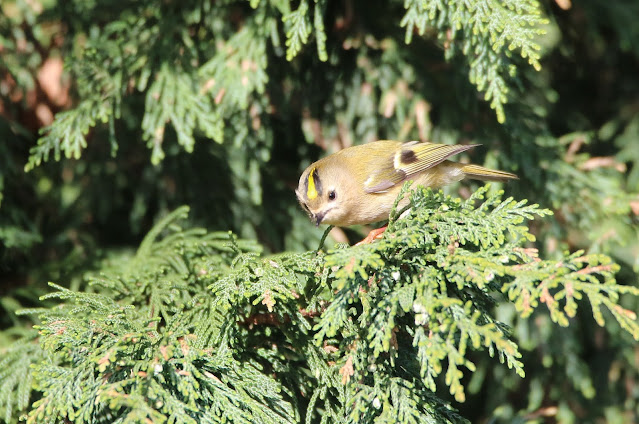 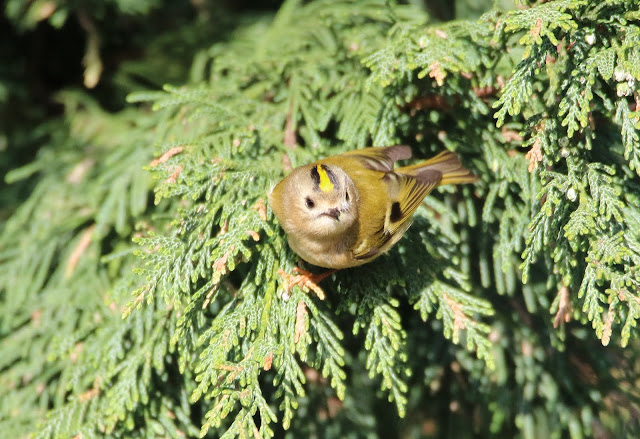 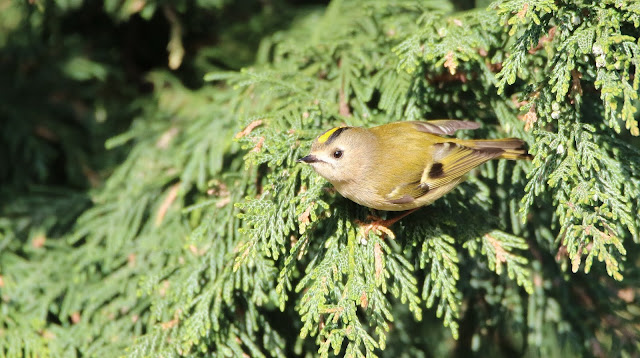 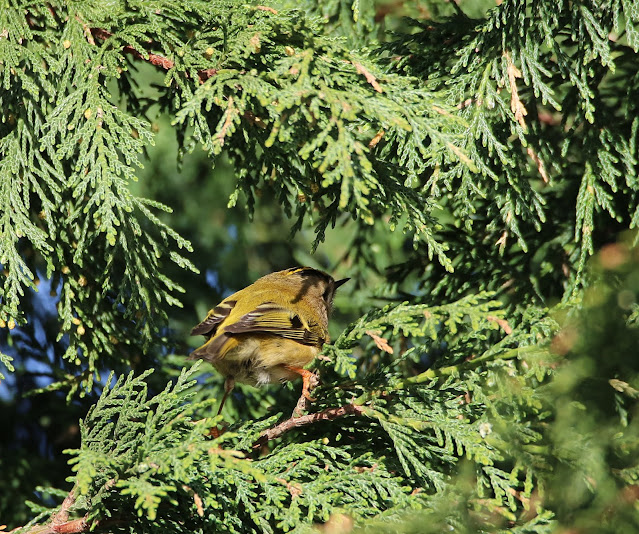 Enlivened by this encounter, I changed plan and decided to visit the patch, despite the fact that I was already pretty knackered, don't know if it's Long Covid, Jab reaction or just old age but I find I'm tiring much to quickly!!😢 (I know man up and stop whinging, we come here to be amused and amazed not listen to your hypochondria!!) Sorry!
So basically I tracked around under the A23 (Banksy doesn't appear to have added any more art to the underpass) crossed the London Road and hit the patch ,very quiet though did have a very long range Blackcap, although as we have had 2 in our garden all winter hard to claim it as full on migration, also had a pleasant surprise when the bright Yellow blob turned out to be the hoped for Yellowhammer rather than the anticipated doggy-poo bag!! So to cut a long story short tracked all the way around the patch, including the Vineyard and didn't see much, all the likely Wheatear fields were scanned intently to no affect!! At least 4 singing (sporadically) Chiffchaffs along the glades were nice. A Red Kite flew over at this point, which is typical the whole walk has been wide open skies and when a decent Raptor goes over I get about 3 shots ,which seem to show it carrying nesting material, which is exciting!!  The best pics I got on this part of the walk can be seen below


Still with me? Good, hard going huh still not long now😂 Back at the Goldcrest now they were still there doing their thing ,got a couple more shots but my heart wasn't in it!! With the wind getting up decided to walk up to Yellowhammer Alley again in the off chance that, the fields that had no wheatears in before would be suddenly full of Wheatears (spoiler alert they weren't!) Thought here was a Stock Dove!! However more Skylarks and Yellowhammers present although much harder to winkle out. ( showing the importance of an early start!!)  I got a church pic with a difference, great views of a Meadow Pipit, a couple of Buzzards showed well but distant and a funny encounter with a dog owner, whose dog , a Golden Retriever type thing absolutely refused to walk past me ,fair enough I can look a bit unsavoury, to the point where the owner had to pick it up it and walk by to much amusement apparently long camera lenses can now be added to the list of random things he is terrified of according to the somewhat disgruntled owner 😃😃🐶


That is the last of the Skylark pics promise!!
To be honest that was about it 2328 pics taken, 84% blurred Goldcrest arse😂, 6 miles walked, acreage of  Sussex Countryside intensively scanned? Kin loads!! amount of Wheatears seen, zero!!!!
However some excellent encounters with some quality birds, the Goldcrests will live long in the memory!!
As Margie wasn't with me today and not to deny you her arty type shots I tried a few the results are below