The Saga of the shed continues
Today phase 1 of shed replacement began, with the demolition of the old shed, so solid was it that it took a team of six men 14hrs to complete ,Not really, Actually Margie and I completed the task in about half n hour, with the whole shed seemingly held together by 4 screws and a bit of chewing gum! Margie had already removed the contents and covered them with a Tarp (she's currently drying it all out where the waters seeped in, can't get the staff!!)
So we started on the demolition, I wanted to use a controlled charge of dynamite, but Margie suggested a Screwdriver and a Lump Hammer would be more appropriate, I did enquire after the Risk Assessment but Margie said, she had posted it to HSC and apparently I didn't need to wear any safety equipment for this job! 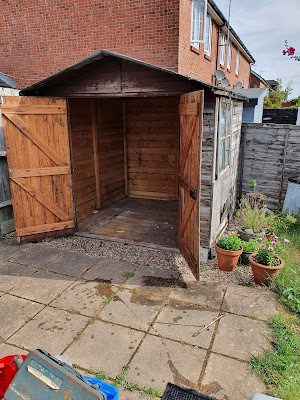 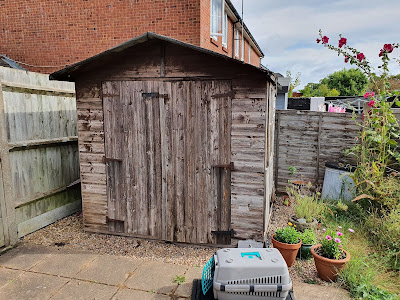 So with the site prepped and ready to go we began the demolition, Margie suggested I worked inside with the screwdriver ,while she was outside with the hammer, I foresaw certain problems with that and suggested a T break to reformulate the plan! After much discussion we decided to begin by taking the windows and doors out!

This was completed relatively easily without incident, although the structure became a little unsteady at this point, though that  could have been due to Margie violently shoving it from side to side, at this point it should be noted that Margie's workmen language was very authentic and her builders bum was quite exciting too! (no pictures 😢) Around this time, I suggested another T break but wasn't allowed, consulted the union handbook to no avail. Instead, I diced with death removing screws from the inside while the structure rocked and creaked a bit like a scene from towering inferno without the fire or the skyscraper,(so nothing like that really) there was a mighty groan (no I hadn't hit my thumb with the hammer) the shed collapsed around me!
Luckily being as nimble as a young Gazelle and unencumbered with bulky PPE I was able to escape uninjured! 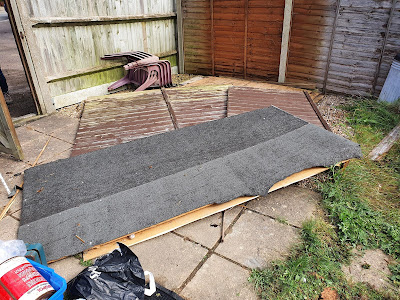 A bit of clearing up and it's all sorted ready for the erection.... of the new shed, which is currently being hand crafted from finest Mahogany, in the workshops of a master craftsmen somewhere exotic!!
I decided a celebratory T break was in order while Margie sorted the last little bit of tidying up which somehow took her 2 hours, (can't get the staff 😊😊)
Next we will need to begin Phase 2 the laying of the slabs, which should start at some point in the next couple of weeks, depending on labour availability and whether the Concrete lorry can get close enough to drop it's load !!
Posted by Paul E at 12:26 No comments:

Today, with a day off work Margie and I made the long journey to Oare Marshes, lured in by the many reports of the returning Bonaparte's Gull, I'm a fan of Gulls and I've seen this little Guy every year since he first appeared, which is quite a few years, but my memory ain't that great so not sure how many exactly!!😅 On arrival at 6.45AM, not a bad effort, we were surprised to find the car park already full, on a Wednesday!! Luckily someone left and we nipped in, although I say it was full, but I reckon with a bit more intelligent  parking you could have got at least another 5 cars in there!!

So parked up, decisions, head back down to the road to see the reported Lesser Yellowlegs or look for the Gull on the mud of the Swale, no brainer, we headed for the Mud!! We walked down the slipway scanning the many gulls feeding on the mud, all of them with the Brown heads of Black-headed Gulls, (non-birders WTF!) Some nice views of a family of Pied Wagtails one of whom posed on a nice blue boat. Plenty of Curlew and a few Black-tailed Godwits on the mud and a Whimbrel. Now I should say at this point the light at Oare marshes especially in the morning can best be described as challenging so bear that in mind when you view my pictures, although Margie made good use of it with some of her landscape pics. 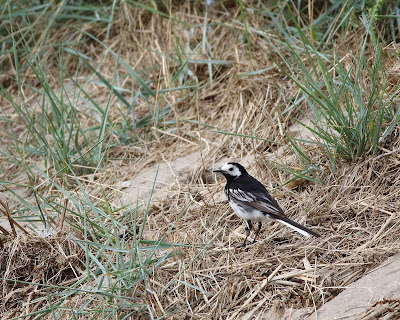 Leaving the Slipway behind us we walked along the river wall, caught between Scanning the mud for Boney and looking over the Reedbed and Bushes in land ,plenty of Reed Buntings, Sedge Warblers and Reed Warblers here and the occasional tantalising ping from the reeds but no Beardies appeared. Eventually success the Bonaparte's Gull was found , a bit far out on the mud, but you can tell what it is in the pics and it looked pretty good in the scope, still in it's breeding plumage.

Flushed with success we continued around the river wall, to the back of the reserve, I scanned the water hoping the Yellowlegs was "round the back" no luck although a distant Snipe, a nice group of Summer Plumage Dunlin,a Green Sandpiper flew across and a few Ruff were nice but to far in the distance for pictures more Linnets ,Sedge and Reed Warblers and Whitethoats here, heard a brief burst of Corn Bunting song ,found the bird atop a distant bush but it flew before a snap could be obtained, denied!! A Grey Heron flew over, Margie was at this time taking more landscape, stuff when a Skein of Greylag Geese flew over, she had one job, get em in a V formation and to be fair she nearly done it!!

We went round the Sluice again pinging could be heard but still no Beardies, plenty of other small stuff though, as before and a couple of Wrens, suddenly the pinging got louder from the Reed Bed in the field to the left of the path, again glimpses of the buggers and then two suddenly appeared in the reeds fringing the water filled ditch separating the path from the field, before heading towards the sluice with me in hot pursuit, ok it was more of an intense amble but you get the picture!! I believe they are juvenile Males but happy to be corrected! 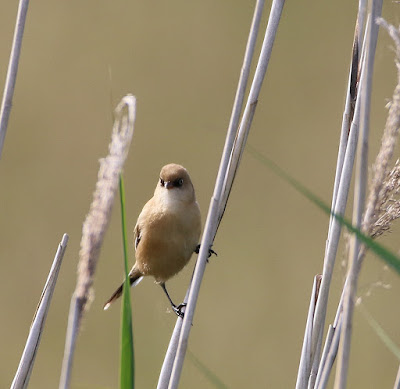 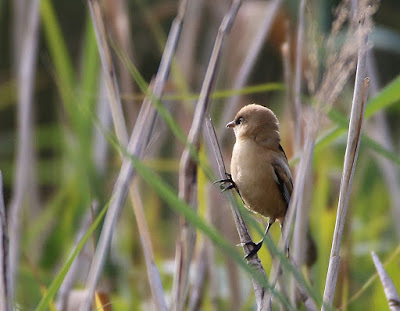 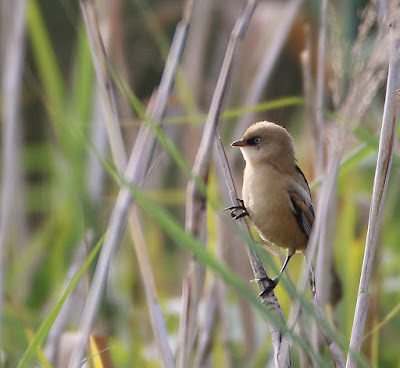 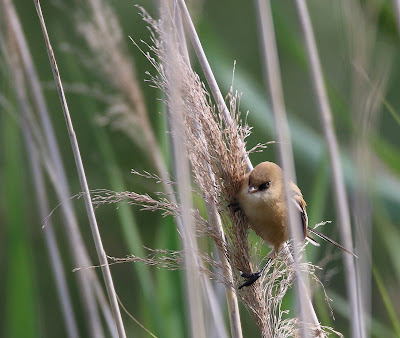 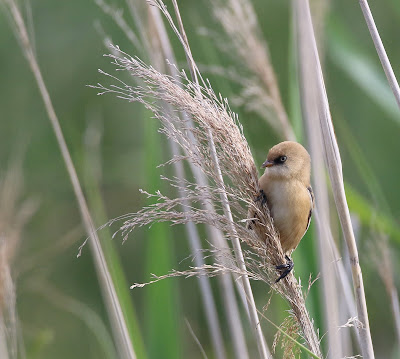 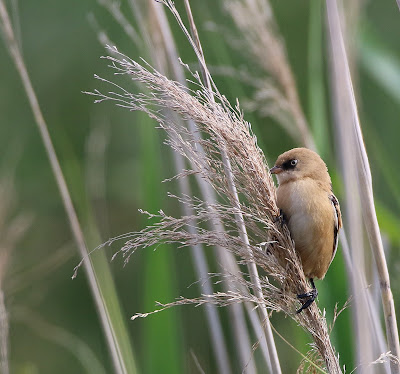 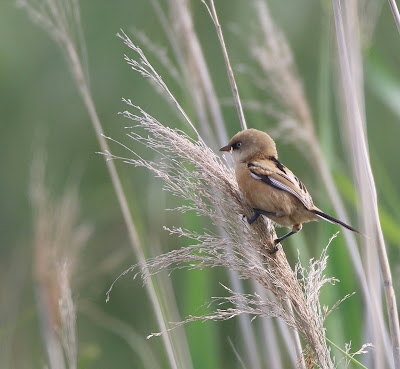 Very happy with this encounter we head on, we are distracted by a large Dragonfly, another birder suggested it was a Southern Migrant Hawker, he seemed quite sure and what I know about Dragonflies can be written on my little finger nail, however looking at the pictures I think it could be an Emperor Dragonfly after consulting various websites? Anyone confirm or deny please. 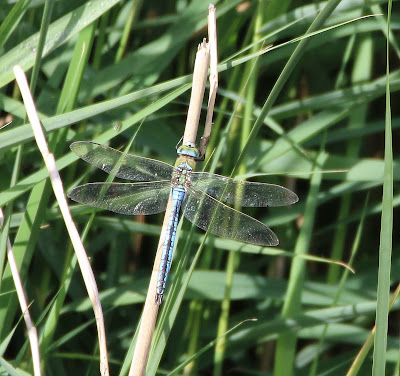 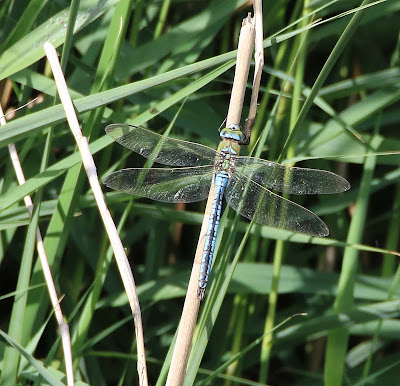 Whilst trying to get a picture of this, the pinging started up again and another group of Beardies joined us once again! This time an adult Male posed well!! 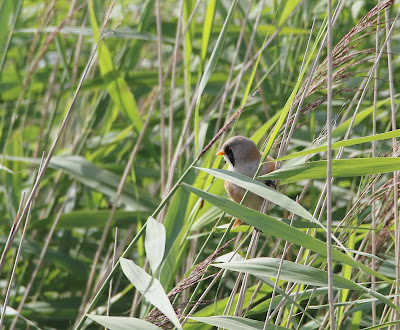 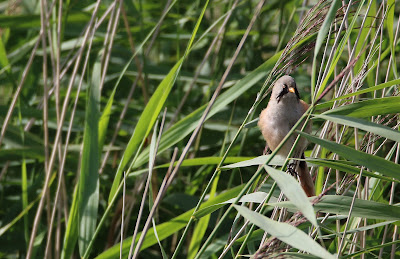 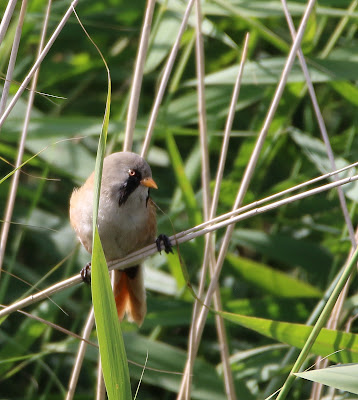 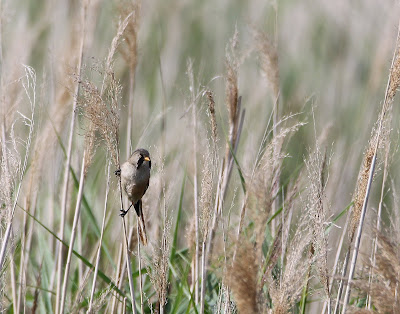 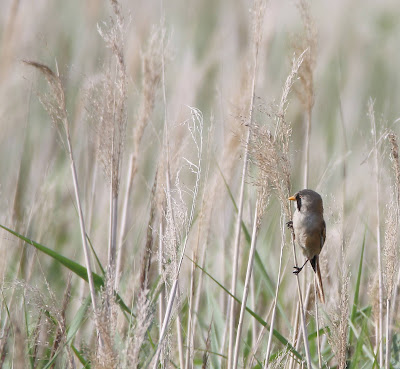 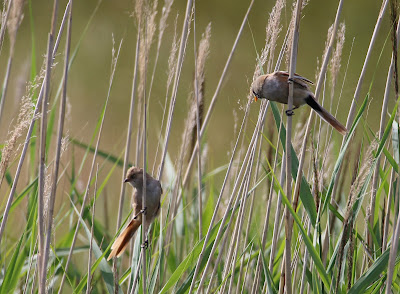 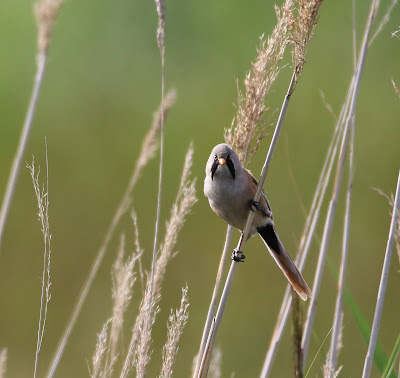 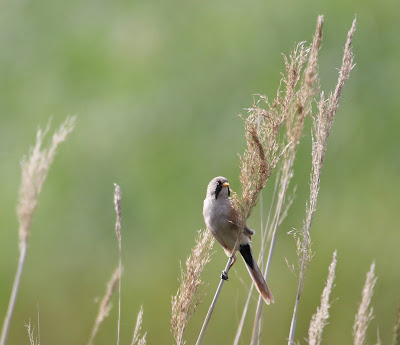 Once again fully stoked we headed off, a Reed Warbler and a Whitethroat showed well and then a Marsh Harrier appeared! 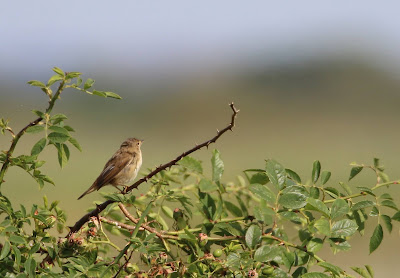 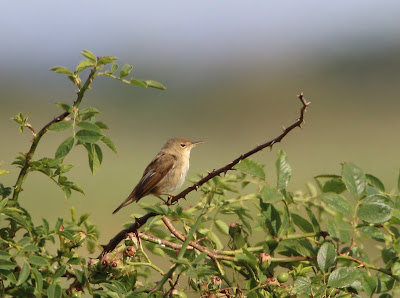 We reached the road, I scanned the area where the Turtle Doves often are but no luck and didn't hear any either. The  Marsh Harrier reappeared on the other side of the road and showed ok. 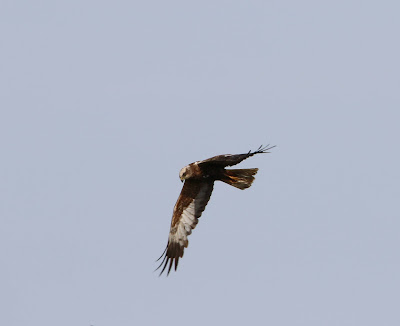 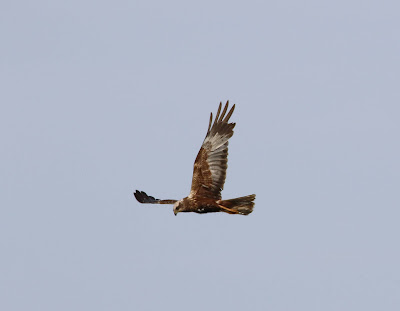 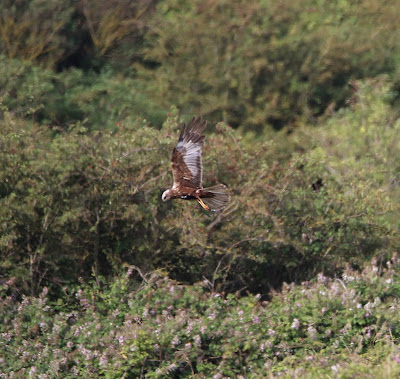 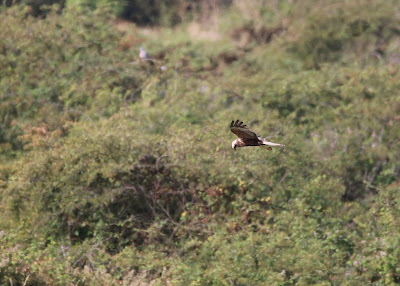 We now reached the viewing area for the flood, I enthusiastically scanned the area for the Yellowlegs, after about an hour my enthusiasm ran out!! There were a lot of waders, Ruff, Avocets, Black-tailed Godwits, Lapwings, I winkled out a Breeding Plumage (well almost) Curlew Sandpiper,a Little-ringed Plover ,a gorgeous FSP Golden Plover flew in but no Lesser Yellowlegs for me! I also found 3 Yellow Wagtails and a Water Rail made a brief appearance, I have few usable pics of these as A) I was fully committed to the search and the light from this viewpoint before noon is notoriously brutal so please forgive the quality of the pics I did manage! You would need far more skill with a camera than I've got to get anything good!! (you would probably need to know how to switch it off automatic settings!!😂😂) The other nice thing about the viewpoint was the whole time we were there we could here loud pinging all around with the Beardies appearing every now and then!! 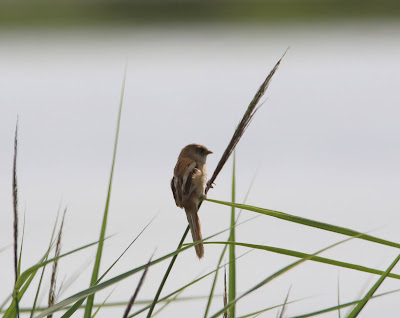 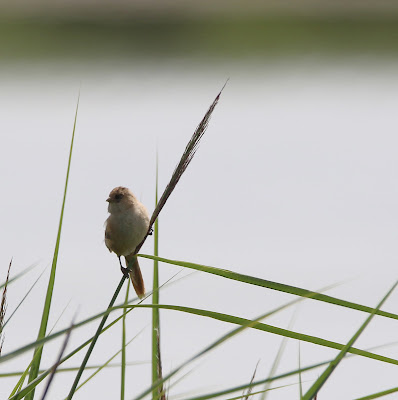 So that was about it, a lovely morning, a superb reserve, loads of birds and not to far to walk around, By the end the sun was boiling and standing scanning for nearly an hour took it out of us ,but one of the best things about Oare at this time a year, is stuff is flying in and out all the time!! Many thanks to Margie for not showing to much boredom while the fruitless search for the Yellowlegs dragged on😉 Great Day!!!