With a terrible weather forecast and birding off the cards,😢 Inspired by Bake-off I decided to make my first ever attempt at Choux Pastry!! I bottled it on the piping front so went down the Choux Bun route rather than risk all on Eclairs.😁

The first process is a bit weird bring water and butter to the boil then bung in the flour beating like mad, til it comes away from the sides of the pan amazingly this all went smoothly!!

After this beat in three eggs until the mixture goes glossy seemed to be a bit of a mess but a good beating sorted it out!!
When the mixture cooled down loaded it into the Piping bag ,this was a bit of a messy job so called in my glamorous assistant Margie who held the bag and squeezed things down nicely. It became obvious after my first attempt that I wasn't up to the task of piping the Buns luckily Margie stepped up again and we had ten pretty smart looking blobs ready to go!!

Within 10 mins at the high temp they had risen magnificently!!! Must have been the way Margie squeezed em out!!😜after another half an hour, the ovens off and they are left in with the door open to dry out completely.
So to fill, Coffee flavoured whipped cream with icing sugar in it and a Plain Chocolate topping, this is where things went a bit tits up, melted the chocolate and butter together ,took it off the heat and stirred in the cream and icing sugar and it went all funny😖!! However Margie once again stepped up and saved the day with a good beating which seemed to turn things around, Hurrah!!. Piped the coffee cream in the middle, while Margie splurged the chocolate icing on the top half ,plopped em together and into the fridge to chill!!

My last day before returning to work after a very enjoyable week off apart from the trip to the dentist obviously, I had planned a lazy day finished off by eating my weight in Roast Dinner!! 😲However news of a Masked Shrike just down the road decided me otherwise!! Shrikes are always good and a Masked one would be a lifer, I know your imagining a Bird in a mask now ain't ya!!😊Always topical!

When I say just down the road, it was quite a long road, 90 miles each way!! But all dual carriageway and I arrived on site just as it was getting light, although by the time I'd walked the lane to the hedge where the sighting had been, it was fully light ,another yomp with Scope, Camera and Bins my poor back😂  although at least I managed to look through the scope this time!! A couple of birders already present "no sign so far" Uh-Oh!! So we waited, various bids appeared in the hedge, Chaffinches, Goldcrests, a Robin, there's always a Robin!! But no sign, some Bramblings flew over calling, Redwings and Fieldfares were about,as were a couple of Buzzards things were looking grim, in my head I was doing the just give it another half hour speech when a keen eyed birder in the group spotted the bird in the hedge behind the hedge we were looking at, well done sir!!

The bird pretty much stayed in that position for the rest of the time I was there although moving nearer to us as time went on though trying to get pictures through our hedge was quite challenging!! The bird was quite active catching insects and avoiding being mobbed by some Blue Tits.

My best efforts at trying to get a picture below, there are a couple of Redwing pics as well to break up the monotony! 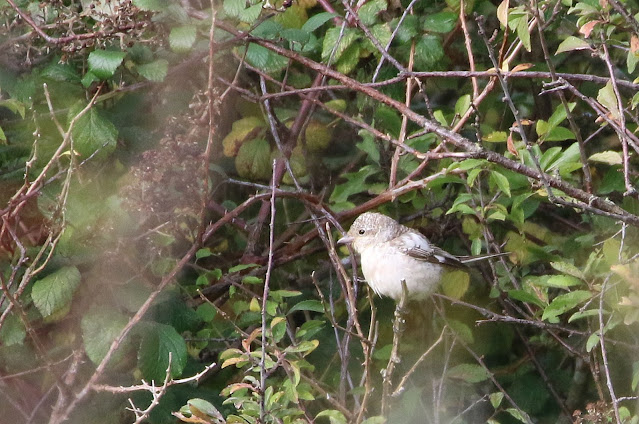 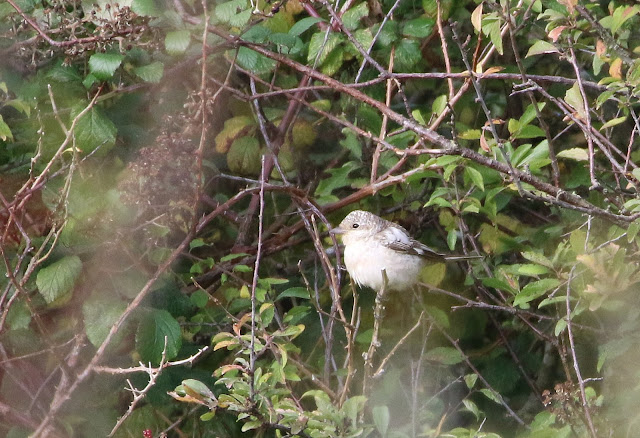 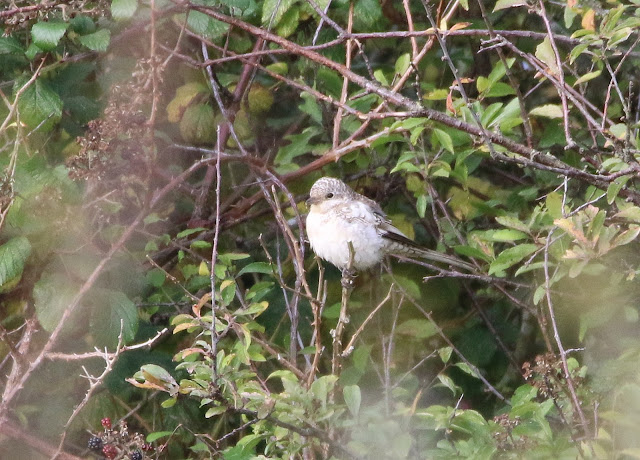 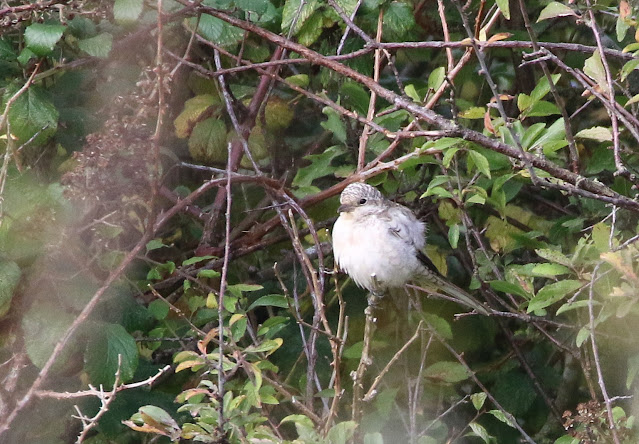 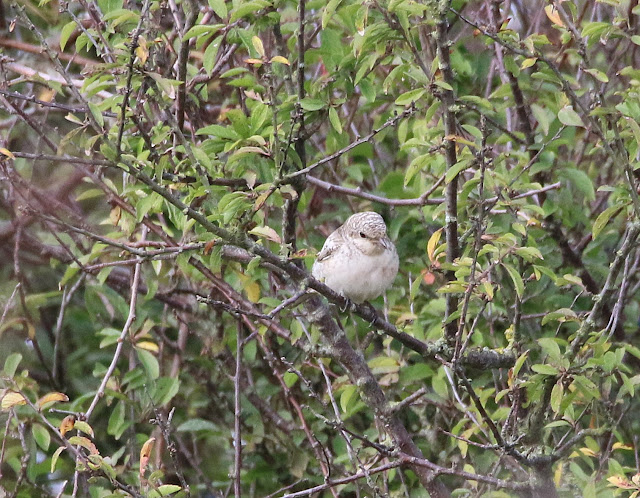 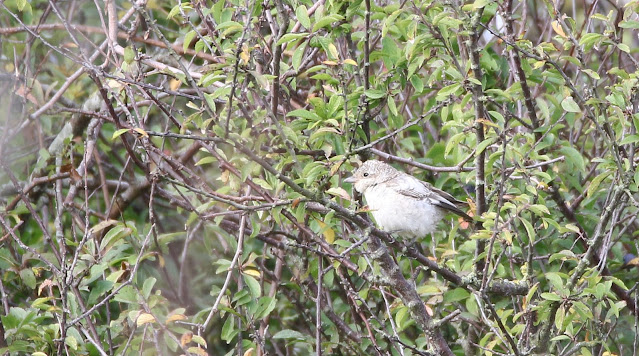 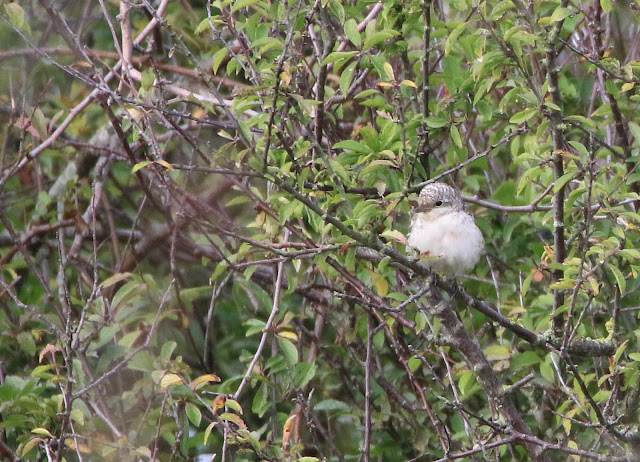 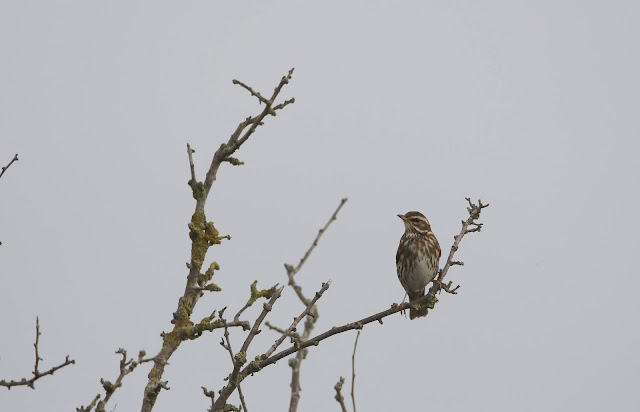 So after a couple of hours taking a load of pretty crap pics hoping it would come through to our hedge it didn't!! I made the long trek back home!! Fabulous little bird looked stunning through the scope hopefully it will show better for more skilled photographers and the can take some pictures that will do it justice.

Now where is that Roast Dinner!!

In all the Lapland Bunting, Wilson's Phalarope and Beard Vulture excitement (see previous posts) I forgot that Margie and I spent a couple of hours at the Hurstpierpoint Patch last Wednesday in all honesty it was fairly forgettable, except for the first field being covered in Pied Wagtails at least 30 birds seen but probably many more lurking in the ploughed furrows. The Yew Tree in the churchyard is full of berries which made it a little disappointing that the only thing that came out of it in ten minutes of  watching was a Great Tit where are all the thrushes!! hopefully be full of Redwings and Fieldfares in a couple of weeks, other highlights of the walk were a couple of Bullfinch and some late Butterflies, disappointingly quiet!

Decided to have a walk around the Burgh today, the original plan was to park at Kithurst Hill and wander round to the Burgh however the fog on the hills ruled that out so we headed further along the road and drove up to the Canada Barn a very bumpy road which should only be attempted in a Land Rover or a KIA Rio! 😁 A brief pause to return our internal organs back into their rightful place and we are on our way, first birds were a few Swallows buzzing through , as usual up here Linnets and Goldfinches were plentiful although very spooky, several Yellowhammers decorated the hedges I managed to photograph the least Yellow one on earth!!! Although the chestnut rump can just about be made out! The grey weather doesn't help with the pics but Margie managed some nice pics of the orange sky getting all arty with her through the hedge shots. Couple of Buzzards sat in a tree just about tolerating each other and a Red Kite drifted by!


We pushed on down past the Old Dew Pond lots of Blackbirds and Song Thrushes about  and quite a big flock (30)  of Fieldfares distantly in a field, this was a trend repeated ,with flocks of Lapwing, Grey and Red-legged Partridge in the middle of fields mostly out of camera range. A Reed Bunting showed well and then I managed to spot a Ring Ouzel running around on a muddy filed distant but record shots obtained!!


We reached the top of the valley and turned left, pretty quiet along here although plenty of Robins and Dunnocks and some nice Common Gulls things improved when the path went through some taller trees and thicker scrub a couple of Chiffchaffs and probably the bird of the day a nice Firecrest which showed briefly though long enough for a couple of shots, lots of Chaffinches, Thrushes ,Blackbirds and a few Redwings plus a big flock of Goldfinches.

We looped around hitting the main track again ,more of the same typical Farmland birds although sadly missing from a lot of Farmland , by now there was pretty much constant sounds of Guns, no doubt reducing the Pheasant population released for the purpose, they were everywhere causing heart attacks every time they erupted from the hedges right in front of us. I'm not a fan of shooting, finding the idea of killing stuff for fun baffling and pretty pathetic, the atrocities on the Grouse moors in the north are pretty unforgivable especially the annihilation of the Hen Harrier, but that said there is no doubt that the farmland around the Burgh, managed for shooting, is amongst the most productive in Sussex for farmland birds and the presence of so many Red Kites, Buzzards and Ravens suggests Raptor persecution is not really an issue ,though no doubt legal predator control occurs, If shooting is banned what happens to these areas would have to be very carefully considered, it would be a shame if the farming is intensified to the point of grubbed out hedges and crops sprayed to death right up to the edge of the fields which would be a disaster for small birds and reduce their numbers drastically and the area become another  arable desert, a conundrum indeed!

Back at the Barn lots of Blackbirds about 9 came out of one small tree but no more Ouzels some more Swallows went through seem a lot around still for the middle of October! Back in the Rio and the slow descent down pothole central, luckily the car didn't fall apart though think half my teeth are still up there!!